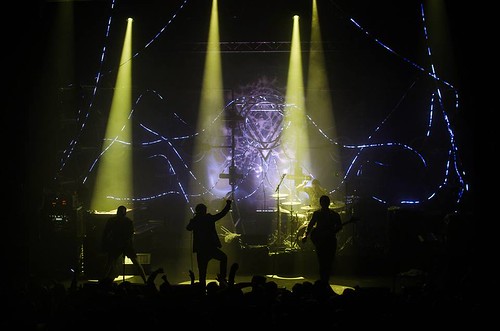 It had been a long wait but the day for Enter Shikari had arrived and to kill time I spent a whole day pottering around the house listening to new tunes and flicking through fanzines.

Come 7.30pm I head to the train only to be let down by our wonderful train service. Signal faults they claimed. The same signal faults that had brought mass disruption to our service for over four years. How about actually fixing the fault should be the first port of call but to the powers that be they’d rather disrupt people’s plans.

Much later than expected I manage to get to Wolverhampton and head off to the Wolves Civic. On arrival I find out I missed the opening act so I head straight to the bar.

On stage main support act Feed The Rhino were delivering a blinding metal set. Crashing guitars and bass, hard as nail vocals and a kick ass drummer certainly won the crowd over. They were certainly much tighter than I remember after putting them on myself around 5-6 years ago. Totally enjoyable set from this metal act.

Once Feed The Rhino finished their set it was straight to the bar for another beer. At nearly £5 a pint I was making sure this one lasted.

Usually when the bands change over you are treated to a number of poor tunes from artists you’d love to deprive of Oxygen but it was to be completely different last night. Enter Shikari had a number of samples and other crazy tunes with a countdown to when Enter Shikari hit the stage. Love the imagination. Top fellas.

Soon it was time for Enter Shikari to hit the stage. They hit it with style which also included a top light show. My jaw dropped at how much effort must have gone into setting this up! In fact throughout the show I was left well impressed with that lighting. Whoever came up with that lighting idea deserves a knighthood for sure!

Musically Enter Shikari delivered what was a top set from start to finish playing old their old hits and well as tunes from the new album. The crowd were loving it as much as the band were. What an amazing atmosphere. That good I ended up tweeting photos and posting video clips as the night went on!

The stage presence from Enter Shikari was madness too. Was it the guitarist throwing his instrument way up in the air and then catching it? Madness but fun to watch! The best moment for me was seeing the vocalist dance about carrying a ladder! I was like ‘What is that about?’ I didn’t have to wait long to see the vocalist start climbing up the ladder into the seating area much to the excitement of the fans upstairs. Again more madness! I wouldn’t have done something so crazy in fear of falling off!

Brilliant night which even saw me head to the front and jump about like I was a teenager again.

There’s a few more dates left on this tour and I highly recommend you pop along to a show to see what all the fuss is about. You’d be fools to miss out!

Thanks to Libby at The Noise Cartel and Enter Shikari for the press pass. Very much appreciated. Thank You! 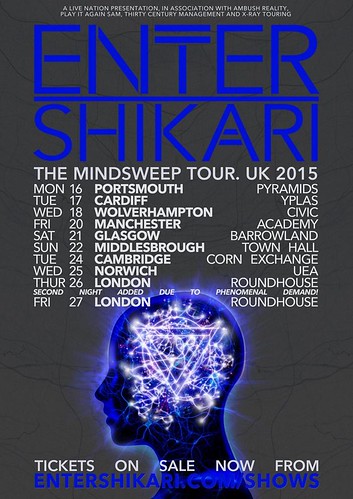